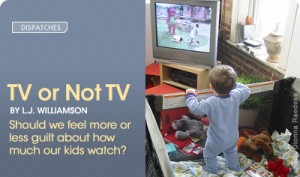 When Teletubbies appeared in 1997, the world got its first glimpse of a TV series produced specifically for babies, as well as its first glimpse of a future utopia in which infants would be born with television screens embedded in their torsos. Many were appalled at the prospect of a program being marketed to a pre-verbal audience, and the show sparked debate about the appropriateness of television for toddlers. Yet, the program was largely embraced by the public, despite the misgivings of such high-profile organizations as the American Academy of Pediatrics, which in 1999 recommended that children under two watch no TV whatsoever. More programming for babies followed, and today, Teletubbies is just one entry in a $1.5-billion market. That?s right, billion with a B as in baby.With numbers like those, even well-respected companies like Sesame Workshop can?t resist getting into the act. The Workshop?s Sesame Beginnnings competes alongside videos from successful babytainment brands such as Fisher Price, Baby Einstein, and Brainy Baby, and the twenty-four-hour-a-day cable channel for babies, BabyFirstTV, launched eighteen months ago. In 1997, television for babies was shocking; in 2008, it?s standard.
As makers of television shows and DVDs continue to produce more and more programs for babies, all of which claim to be educational or beneficial in some way, researchers continue to produce more and more studies that link television to ills such as speech delays and attention deficit disorder.

Parents haven?t totally ignored the anti-TV warnings from pediatricians; we?ve just assimilated them into our consciousness as we simultaneously violate them. The result is a nagging background noise of guilt competing with the background noise of the tube. Nearly every parent I?ve spoken to allows his or her child to watch TV, and nearly every parent has misgivings about it. We?re holding a remote in one hand, and a burden of guilt in the other.

?Last week, my older son was home sick so I just let him watch TV all day, but then my little one joined in. I felt bad about that,? said a parent at my daughter?s toddler class.

?I feel guilty when I?m watching one of my shows and then my son comes in the living room to join me. I was watching a Western and soon after he started imitating what he?d seen on the show, pretending to be playing with guns and shooting. I didn?t like that.?

?Maybe it?s because I?m Catholic and feel guilty about everything, but I do feel guilty about how much TV my kids watch,? said another mom. ?I always think I should be spending more time playing with her or something.?

A teacher chimed in. ?Trust your gut. If you?re feeling guilty, that means something.?

?But If I had to play with my kids all day, I would go crazy,? responded another parent. ?I have things I have to do.?

?I don?t feel guilty at all,? said another. ?We only watch educational shows, so I think its fine.?

Television Guilt falls into two major categories: Time Guilt, i.e. ?We should be spending quality time, not watching TV,? and Content Guilt, i.e. ?I know this show isn?t the best thing for a toddler to be watching.?

Time Guilt is tough for an outsider to control, but the producers of baby videos are doing everything in their power to eradicate Content Guilt by making shows that they assure us are not only age-appropriate but also educational.

?A recent University of Washington study shows that up to ninety percent of children under two are watching TV. We?re addressing that reality by providing a cleaner, safer alternative,? says Sharon Rechter of BabyFirstTV. ?A lot of companies will put out a video with just some pictures and music and say it?s educational. But on our channel, every two-minute segment is supported and approved by an expert.?

An expert! Who can argue with an expert? Well, other experts. I asked Rechter if she was familiar with any of the studies that connected infant TV viewing with language delays, and was surprised that she said, ?I?ve never heard of that.?

When I asked Dr. Strasburger about BabyFirstTV?s assertion that AAP thinking on television is ?outmoded,? he didn?t mince words. ?She is absolutely, totally wrong. In 1999, when we first suggested that babies shouldn?t be watching TV, it was just based on what we thought was common sense. Now in 2008, there are half a dozen good studies to back that up, documenting language delays associated with watching television.

?For us, before you expose a baby to TV, we believe you have to demonstrate some benefit. But there are no studies ? zero, zilch, nil ? that show benefit. But we can prove harm.? I?m now clear on Dr. Strasburger?s position on babies and the blue screen of death. But is TV ever okay for kids?

?If you watch good TV like Sesame Street after age two, it can be quite useful,? Dr. Strasburger says. ?But the infant brain is unique in that it is not fully developed ? it is particularly malleable, plastic, under the age of two. Early infant brains develop in response to stimuli from the environment. If their environment is a screen, their development will be different than it will be if a human can interact with them. If in the future you can talk to your screen and it can talk back, maybe what I?m saying will not apply. But we?re not there. Babies need interaction with live, in-person human beings. There is more and more research that says exactly that.?

Okay, but what if you?re a full-time parent working at home and you just need a break?

?Mothers should avoid parking their kids in front of TV as much as possible,? Dr. Strasburger says. ?That doesn?t mean that you can?t do it a couple of times a week for thirty minutes ? they?re not going to suffer irreparable brain damage. But the idea is to be careful and cautious. Parents do need help, but the help shouldn?t be coming from the television set.?

Arthur Pober, BabyFirstTV?s resident expert in early childhood education, comes right back with the reassuring words we want to hear: ?When they say don?t just leave your child in front of a TV they?re right. We don?t recommend three hours of exposure to this. But we?re also realistic enough to know that you need a break. BabyFirst is trying to offer an opportunity where you can utilize the time for all of the things parents want or need to use the television for, and it gives them a sense of security.?

Security is the name of the game at BabyFirstTV. Is the babycentric- television- industrial- complex just addressing the reality of the parenting trenches? There is absolutely nothing that could even vaguely be construed as offensive ? just images of parents singing ?The Itsy Bitsy Spider? to their adorable, wiggling toddlers, cute little squirrels hiding acorns, magical rainbow-colored ponies prancing to classical music. But let?s face it ? if we?re talking about six-month-olds, they?d probably be just as entranced by an episode of 24. That?s because infants will typically orient to any TV screen, no matter what the content.

While reading their promotional materials, I can?t help but notice that BabyFirstTV is trying to have it both ways. On one hand, they emphasize the benefits of using the channel as something to experience with your child. On the other, they say it?s there to give parents a break. Perhaps we could do a little of both ? but then we?d have to forget the dire warnings from the AAP, which say that for kids under two, we should do neither.

Is the babycentric-television-industrial-complex just addressing the reality of the parenting trenches, while the AAP looks down their noses at us from an ivory tower fantasyland? Or is it the sellers of babytainment who are marketing a false fantasy of effortless enrichment?

His words are as soothing as the gentle sounds of Baby Einstein?s Lullabye Time. But then again, sometimes, I feel like the whole concept behind educational TV is just to help me to pretend that something that?s less than optimal is in fact A-okay. ?Educational TV? must be more wholesome than plain old regular TV, isn?t it? Then again, a ?Nature Valley Pecan Crunch Granola Bar? sounds so much more wholesome than ?Nestle 100 Grand,? doesn?t it? But check the back of the package; they?ve got the same number of calories.

A parent and child cuddle up together on the sofa under a cozy blanket and turn on a baby video. Mommy points out colors, shapes, and words, just as she would with a book. Isn?t this just as good as, or maybe even better than, reading a book together? This is the sort of experience BabyFirstTV is selling, and I don?t see the problem, until I talk to Dr. Don Shifrin, another pediatrician from AAP.

?The screen has sound and color and moving images, and no parent can compete. The child isn?t watching the parent, they?re watching the screen ? the screen is interposed between the child and the parent. So we?ve formed a triangle in which the parent is the weakest part instead of the strongest.?

When I confess to Dr. Shifrin that I?ve just put my daughter in front of the TV so I can take his call, I expect him to hang up on me. I?m relieved when he instead offers me absolution.

?We don?t condemn many things in life. We don?t hate television. We even gave Sesame Street an award. But what we?re here to do is make recommendations for optimal health, and for infants, TV is not optimal. When I confess to Dr. Shifrin that I?ve just put my daughter in front of the TV so I can take his call, I expect him to hang up on me. No two-dimensional screen can equal a three-dimensional caretaker. But we?re not going to tell people ?You can?t watch TV? ? that?s silly poo-poo. We are not the nation?s nannies. TV is here to stay. But we have to learn to manage it and not let it manage us.?

Dr. Shifrin continues, clarifying AAP?s oft-misquoted position on television: ?We use the terms ?discourage? and ?avoid,? not ?eliminate.? Parents have to be the filter. There has to be a balance, but ?balance? is the toughest word in parenting.? And as for the difference of opinion that the makers of baby programming and the AAP seem to have, Dr. Shifrin puts it like this: ?We?re saying, let the buyer beware. Don?t believe everything you read or hear until perhaps people that don?t have a vested interest in selling it to you agree.? And the claims made by makers of ?educational? television for babies, says Dr. Shifrin, are just based on speculation; it?s all a big, uncontrolled experiment that we don?t yet know the results of.

I?ve come to the conclusion that television is neither enriching nor evil. It?s reasonable to view as suspect the claim that a video can turn a kid into an ?Einstein.? But it?s also reasonable to let your kid watch a little Sesame Street without flagellating yourself to death with a peer-reviewed journal article. Just let go of the guilt ? either by letting go of the quest for parenting perfection, or by letting go of the remote.