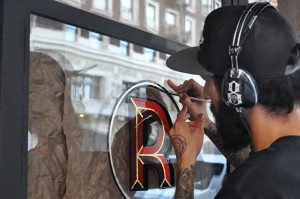 Mitchell Frank's barking ringtone is at it again.

Tonight Frank is hosting a private party at the Regent Theater, his newly renovated venue on Main Street, in the Historic Core section of downtown Los Angeles. Outside, a painter is still delicately putting finishing touches on the red R's that adorn the windows. Inside, a large crew scurries and hustles, cords here, ladders there. There's still crumpled paper and masking tape on the doors that will be thrown open to friends and family in just a few hours.

Originally named the National and rechristened the Regent in 1917, the theater has existed since at least 1914. It was once a first-run movie theater, then a B-movie grindhouse, then an adult cinema with a marquee advertising "peliculas calientes."

The theater closed in 1992 and stayed closed until 2006, when it began opening for special events. Frank, who runs Spaceland Productions, took over the lease in 2012.

Natty in his necktie, with close-cut gray hair, Frank is every inch the worldly impresario as he asks an assistant if she can grab the woofing phone, returning the Lovesong, the Regent's bar, to calm. It's the only part of the venue that looks 100 percent ready for tonight's launch ? aside from Frank himself.

As the man who birthed Spaceland, the Echo and the Echoplex, he's been in this position many times before. But this time, Frank's venue will have plenty of company.

The downtown theater district is full of sleeping giants, awakening one by one to the thrum of indie music: The Orpheum. The Theatre at Ace Hotel. The Belasco Theater and its better-established next-door neighbor, the Mayan. Even more of the Historic Core's 20 surviving theaters undoubtedly will shake off their cobwebs in the years to come, as downtown's renaissance continues.

Which raises the question: How can there possibly be room for them all?

It's easy to imagine that competition could get rough among promoters when the choicest acts come to town. But many music business veterans are making the opposite bet, sure that L.A.'s booming music scene has plenty of room to grow and wealth to share, especially downtown.

"This is center city," Frank says. "This is where the action should be."

Among promoters such as Frank, the attitude about downtown is one of unbridled optimism, a feeling that a rising tide lifts all boats. There may be a saturation point someday, but according to everyone L.A. Weekly spoke to, we aren't nearly there yet.

Kelly Sawdon, partner and chief brand officer of the Ace Hotel Group, says the number of venues, rather than cutting into business, helps solidify downtown as a destination.

"It tells the story that you go downtown, you see a show, get dinner, go to bars," she says. "Traditionally, downtown didn't have a momentum behind it to be a place that people associate with a night out."

She says oversaturation is not something the Ace is concerned about. "In the late '20s, early '30s, these were all theaters that were successful operations, and if you do interesting programming, I think, the more the merrier."

The Ace reopened its theater, built by the United Artists film studio in 1927, on Feb. 14 of this year. Its first show: a jaw-dropping set by the British band Spiritualized, who performed their landmark 1997 album Ladies and Gentlemen We Are Floating in Space with the help of a full gospel choir. For Sawdon, it seemed a harbinger of good fortune to come.

"Everything coming together, opening on Valentine's Day, them playing that entire album, such a rad night," Sawdon enthuses. She even had several friends fly in from New York to L.A. to see the show ? or at least they tried to, until a flight-canceling snowstorm hit, leaving them bereft.

The unfortunate incident with the stranded, envious New Yorkers speaks to Los Angeles' rising position on the nationwide music scene. Frank says booking agents now tell him that L.A. is their top market in the United States for live music, rising from its former No. 3 spot behind New York and San Francisco.

Another reason so many venues of comparable size (about 1,400 to 1,600 capacity for the Ace, Orpheum, Belasco and Mayan; around 1,100 for the Regent) can happily coexist in such close proximity: the Internet.

Tom Windish of the Windish Agency, which books tours for a lengthy roster of mostly indie-label artists ? including The xx, alt-J and the aforementioned YACHT ? says the ease with which fans can learn about, hear and share new music has completely changed the game from what it was just 10 years ago. It's now easier than ever for bands with smaller promotional budgets to gain devoted followings and quickly outgrow more intimate clubs such as the Echo and the Troubadour.

"All over the country, there's a need for venues that can fit smaller bands," Windish says. "And in downtown L.A., there's a lot of buildings that are equipped just for that."

Downtown's revival seems tailor-made to collaborate with a changing, social media?driven music scene, Windish says. "If you think about what drives people on social media, music's a big thing that links people together. It's really easy to connect which of your friends are going to shows, and they like going to see smaller bands. Twenty, 30 years ago, it was all about huge acts. And it's not like that anymore."

Also a thing of the past is clubs treating bands poorly. With more venues to choose from, if a band isn't happy at one place, it can head down the street to another. This is where any sense of competition translates into a good thing ? for artists and, in turn, for audiences.

"It makes all the clubs have to work harder, to book better shows, book better bands, make sure the bands have a great time, make sure the shows are marketed ? it's the opposite of having a monopoly," Windish says. "I think that's good."

On the same night as the Regent's grand opening, a short distance away, the Ace Hotel hosted rooftop dance club the Times, where clubgoers could ooh and aah over the former movie palace?turned-church's dazzling balconies, opulent lobby and stained-glass exit signs.

Just down the road, Weezer played an intimate show at the Belasco. Confetti cannons shot fluttering, colored paper into the air while a largely unsuspecting audience bounced just yards above the now-sealed entry to a Prohibition-era tunnel network, once used for smuggling booze, accessible through one of the Belasco's closet floors.

A few days later, Goldenvoice, the concert promoter behind Coachella, announced that it had secured the exclusive booking lease on the Belasco, promising upgrades to the 1926 venue's lighting, sound and stage features.

The Regent's Frank admits that there may be competition for bands here and there but, given the sheer number of exciting acts L.A. has to offer, it's still far from fierce.

"Hopefully we'll be everyone's favorite room, and we'll get the first call," he says with a shrug. "But it's a big town. You're not going to get everything you want but it's OK, because there's enough for everybody."