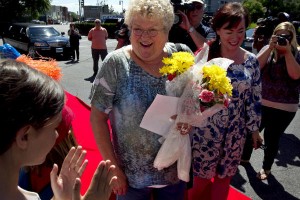 As her story begins to fade from the news cycle, bullied bus monitor Karen Klein will ride off into the sunset a whole lot richer, while the ?bad guys? ? her seventh-grade tormentors ? exit the stage a lot less cocky than they entered, suspended from school for a year and their actions thoroughly condemned.

Although the story and the donations it inspired may have turned out well for Ms. Klein, anyone who?s watched the cringe-inducing video of her harassment can see that bullying continues to pervade school environments.

On comment boards, some cynically groused, ?I was bullied like that every day all through high school. Where?s my half million?? One blogger posted the news of Klein?s incident under the sarcastic title, ?Someone Is Bullied On A School Bus For The First Time Ever.? In short, the feel-good campaign to send Klein on ?the vacation of a lifetime? did nothing to solve the problem. But a good hard look at everything this video shows us could.

Though it lacks horrific violence and disturbing racial implications, the bus-monitor video is in some ways reminiscent of the 1991 video of the police beating motorist Rodney King. That earlier video provided a document of a rarely recorded but frequently occurring behavior, grabbing the nation?s attention ? at least for a few days ? and exposed us to an oft-ignored injustice. And like the King video, the bus-monitor video shows us something with a far greater significance than the event itself.

The first failure we see is Klein?s. The job description for a bus monitor in the Greece Central School District in New York where she was working specifies requirements to ?maintain order on buses,? to ?enforce district policy governing student behavior,? and to ?report orally and in writing instances of continuing disruptive student behavior.?

Klein had a responsibility to step up and assert her authority ? if not for her own benefit, then for the benefit of the other kids on that bus. Instead, she sat and tolerated the abuse, performing none of her duties and leading by the worst kind of example. The takeaway for a child, witnessing this scene as it unfolded, would be: ?If a grown-up can?t do anything to stop them, then I sure can?t.?

That simply isn?t true. When they stay silent, bystanders condone bullying, but when they speak up, they can kill it. Speaking up is scary and difficult. But if children, and certainly their adult guardians, are part of a school culture that consistently encourages and empowers them to do just that, a dramatic change can take place.

A victim might be outnumbered by bullies, but bullies are frequently outnumbered by witnesses. With instruction, encouragement, and support, these witnesses can shift the balance of power by virtue of their numbers.

But they first must be taught that they have that power, and assured that their reports will be taken seriously. Peer intervention is a powerful force. This entire incident went public because a fellow student, under the moniker CapitalTrigga, uploaded the video to YouTube in order to draw attention to the problem, becoming unsung hero in this drama. Once that happened, the bullies were steamrollered into submission by the crushing weight of public opinion.

Apologists for Klein?s total lack of action might insist that she wasn?t trained to handle bullies, or that she simply felt powerless. If either is true, it points to a wider, more systemic problem: that Klein?s school district fails to provide its personnel with adequate training to manage abusive students, thereby putting all students at risk, or that they fail to listen to or act on staff reports of abusive student behavior. Either scenario would allow bullying to flourish.

Had Klein?s employers done more to emphasize an intolerant attitude toward bullying, we might have seen her display a little more backbone, knowing that school officials had her back. But in interviews, Klein said that she didn?t even do so much as write the boys up for their hateful behavior, because, in her words, ?What good would it do??

Eventually, the boys did receive a full year of suspension from school ? but only after the video had made the rounds. If this sort of punishment was standard, with or without a viral video, school officials sure didn?t let Klein in on it. Her assumption was that nothing would happen to those kids.

The saddest thing is how familiar the experience of bullying is for children, in all walks of life. Rare is the person who?s been through twelve years of schooling and not witnessed bullying. But since bullying is such an ancient tradition, too many of us have become complacent about it, assuming there?s nothing that can be done instead of doing everything possible to stop it.

It?s a shame what Karen Klein went through, but the bigger shame is that, after all these centuries ? despite media attention and efforts in schools ? effective bullying prevention measures are still not implemented in all schools ? as well as on school buses. And the most successful anti-bullying programs don?t only deal with bullies and victims, but engage everyone on campus.

This incident can help to create an entire culture that is intolerant of bullying ? one that obligates, involves, and empowers everyone ? administrators, teachers, parents, students, and yes, even bus monitors. Now that would be a happy ending.