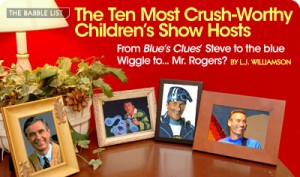 When you?re married with children, you need to do anything you can to keep your groove on, and a healthy fantasy life is key. Fortunately, child care duties can coexist with this important practice ? that is, if you call plunking your kids down in front of the TV ?child care,? and heck, I sure do! So while the kids are being entertained in the land of television make-believe, parents can sit on the couch and play along too, making up some nice little make-believe daydreams of their own. Nobody told me that good parenting was going to be this easy! (And for more of Babble?s kid-entertainer crushes, check out our Crush of the Week on Strollerderby.) ? L. J. Williamson

Shane and David from The Upside Down Show

Shane doesn?t have enough hair, but David has too much of it, and it dangles on either side of his head from a goofy butt-crack center part, so until he figures out how to part his hair on the side, he?ll have to share half of the number ten spot. But if you rolled these two guys together, they would make one really lustworthy specimen. Shane and David are marvelous at physical comedy, and their adorable antics might make moms with wandering minds wonder what other physical skills they might excel at.

Bill Nye known in some circles as the Chuck Norris of science, and to a geek-loving girl like me, that?s as hot as it gets. Salon Magazine once christened this former Boeing engineer ?The most eligible bachelor on children?s television,? and I have to agree, but I really loved it when Nye took his act to PBS for an adult program, where he could talk about spicy topics like the science of sex. Oh Bill, you can suppress my hydraulic resonance anytime.

Plenty of moms like both of the Kratt brothers, the hosts of the animal shows Zobomafoo and Kratts? Creatures, but I?m all about the dreamy, darker-haired Chris. I wouldn?t kick his brother Martin out of bed for eating crackers, but there?s something about the way Chris lovingly fondles snakes, elephants, and other wild creatures as he tramps around the rugged outback and peppers his talk with references to the importance of good environmental stewardship that brings out the animal in me.

I know what you?re thinking: how can somebody?s seventy-year-old grandpa be hot? But Fred Rogers wasn?t always the guy you remember when you were a kid. In the late 1950s, when he first began working on television, the young Mister Rogers was quite a handsome man, and had housewives swooning with his neighborly good looks and soft-spoken charm. I dare you to watch the video of Fred Rogers addressing the U.S. Senate without being overcome by his intelligent and genteel sensitivity. I didn?t become acquainted with Mister Rogers until the seventies, so I certainly never had the hots for him myself, but I can easily imagine why my mom?s generation would have.

He?s pretty, he?s dangerous, he?s . . . Pee Wee? Please allow me to blow ya mind: I?m going to ask you to start thinking about the sex appeal of Paul Reubens, a.k.a. Pee Wee Herman. It?s not the childish Pee Wee character that?s intriguing ? it?s the mystery behind the man. Even Kanye West adopted his look for a while, and Herman/Reubens is a fascinating study in contradictions: it?s obvious that percolating just beneath the boyish falsetto giggle is a man of appetites. Remember how shocked we all were to see that arrest photo? Pee Wee-era Herman is slender, mincing ? dare I say Bowie-like? ? and if you have a taste for the avant-garde, the guy who talks to his furniture is your man. It?s not tough to imagine that a big adventure with Pee Wee might be a walk on the weird side, but it certainly wouldn?t be boring.

A good scandal can make anyone?s attractiveness rating go up, and Melanie Martinez?s ?scandal? is certainly a good one ? in that it?s hardly very bad at all. Martinez made a couple of suggestive, humorous videos that satirized the virginity movement, and although the videos weren?t all that explicit, the faux public service announcement spots were enough to get Martinez fired from her job as host of PBS Kids? Good Night Show. I?m holding out hope that getting sacked from Sprout will do for Melanie Martinez?s career what it did for Vanessa Williams?.

The Wiggles, the ?world?s biggest preschool band,? are a thrilling phenomenon not only for kids, but for their moms. Backstage on tour, the Wiggles reportedly find themselves knee-deep in MILFs. It seems that The Wiggles, especially the blue one (oh please ? I can?t be bothered to look up his name) are the repository for the sexual fantasies of repressed stay-at-home-way-too-much moms everywhere. When those who haven?t been to a live concert in years suddenly find themselves in the stadium at a Wiggles gig, they tend to re-experience tinglings they hadn?t felt since the last Rick Springfield tour.

When I went to Portuguese children?s show superstar Xuxa?s website, which is, not surprisingly, entirely in Portuguese, I learned that the blonde bombshell has a ?Campanha contra explora??o sexual,? which the Yahoo Babelfish Translator decoded as ?campaign against sexual exploration.? Jeez, Xuxa?s a far cry from the matronly looks of Shari Lewis or the Romper Room lady, but what a square. What?s she got against sexual exploration?

Oh, wait ? it actually means exploitation, not exploration. Okay, yes, that is bad. And Xuxa has to be sure to let everybody know that she?s very much against the sexual exploitation of adolescents because the queen of all sexy kids? show hosts has a little esc?ndalo do sexo of her own. Prior to her children?s show hosting gig, the actress then known as Maria da Gra?a Meneghel was in a film called Amor estranho Amor (Love Strange Love), in which she played the role of a prostitute who seduces a twelve-year-old boy. No wonder Xuxa sued to try to stop the film from being released on video.

Sportacus is played by a toothsome morsel named ? I?m not making this up ? Magnum Schwing. No, wait, I did make that up. His real name is Magn?s Scheving, and he was the European Men?s Individual Champion in Aerobic Gymnastics, which means that the guy is BUILT. Hubba hubba ? the tight fitting suit this Icelandic Viking wears on LazyTown leaves little to the imagination, from those bulging biceps, to those rippling quads, to that toned little rump. This guy is so hot that all of the snow in Reykjav?k couldn?t cool him down. It?s kind of ironic that the star of a show that?s all about getting you moving makes me just want to lie in bed all day, dreaming of cooler climates.

Steve, oh Steve, how can one man-boy be so dreamy? I imagine that the Blue?s Clues-era Steve would respond to any suggestion I made, no matter how lecherous, with a gleeful ?Okay, let?s go!? And isn?t cheerful compliance what you want in a lover? Like another famous idol, Steve was even rumored to have died ? of a drug overdose, no less. Not only does this secure his place in the annals of ?cute one? history (alongside Sir Paul), but it also proves that I?m not the only one who enjoys imagining the bad boy side of the adorable, rugby-shirted waif. Steve left Blue?s Clues in 2002 to form ? get this ? an indie band (swoon!) with the help of alterna-idols The Flaming Lips (double swoon!). [Read Babble?s interview with Steve here.] Oh Steve, we all suspected that underneath those green stripes beat the heart of a bohemian, and you didn?t disappoint.

In his post-Blues career, Steve has appeared in two indie films ? the vampire flick (triple swoon!) Netherbeast Incorporated and Flaming Lips vehicle Christmas on Mars. The fact that he?s now balding diminishes none of his charm. Forget The Wiggles ? I?m going to try to get backstage at the next Steve Burns concert.