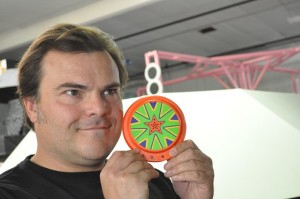 We know actor Jack Black for his "best band in the world" bluster as half of Tenacious D, and for his on-screen persona: a heavy metal pothead. But Black also happens to be a patron of the arts. Or just stuff that he thinks is cool.

Black and his wife, Tanya Haden, have helped fanned the flames of small, select handful of projects including Art Division, an organization run by Dan McCleary, who teaches painting to young people in the Rampart district; and a short animated film about a hot air balloon explorer.

Through Haden, a CalArts graduate, Black met artist Steven Hull, and has since supported several of Hull's projects, including Hull's artist-run gallery space, Las Cienegas Projects, which existed for two years in a building on South La Cienega. "It would have closed after six months if Jack hadn't come in and saved the whole program," Hull says. Black also helped Hull to create Nothing Moments, a series of 24 books, each with a different writer and graphic designer.

This year, Black asked Hull to be the point man for the Circus of Death at Tenacious D's Festival Supreme at the Shrine Auditorium on Oct. 25, which aims to become a multimedia "Coachella of Comedy." Black and musical partner Kyle Gass are curating comedy and music, while Hull is taking the lead on the circus ? the Halloween-inspired visual arts portion of the festival.

The Circus of Death will have its own stage and a number of exhibits, including a merry-go-round; a puppet show with a puppeteer from the beloved Los Angeles institution Bob Baker Marionettes; a translucent Plexiglas castle; an iceberg tunnel;and a church-shaped bounce house designed by artist Jim Shaw, which will have two ?schoolgirls? bouncing inside. The circus' soundscape will be created by Gibby Hayes of Butthole Surfers. Visitors to the circus will be able to take a spooky train ride on a five-car train, similar to the train ride in Griffith Park. But spookier.

"We wanted to have a Disneyland for grownups, and as soon as we started talking about that, I thought of Steven, because I had seen that he already had this powerful obsession with choo-choo trains and circuslike rides," Black says. "As soon as I mentioned it to him, the ideas just started spilling out like a river."

Though Festival Supreme is in its second year, it's the first time the event has included these seasonally appropriate elements. "We realized too late last year that, holy crap, our festival happens right near Halloween, and we didn't really do anything," Black says, "and this time we were like, let?s go all the way with the spooky fun and crossover creepiness."

Despite an impressive lineup, last year's Festival Supreme drew gripes from attendees, who complained about the event's cramped quarters on a fenced-off section of the Santa Monica Pier, which made it tough to get everyone into the event's various venues. This year, however, the festival will be held on four stages at the Shrine Auditorium ? two indoors, two outdoors ? with the main comedy stage at the Shrine's 6,000-seat theater. "You can't call it intimate, but no one will be turned away," Black says.

The event will include live comedy performances from Fred Armisen, Maria Bamford, the cast of The State, Comedy Bang! Bang! with Scott Aukerman and Drunk History, as well as blasts-from-the-past Cheech & Chong and Dr. Demento. The music lineup features acts with a funny edge, such as Peaches, D.J. Lance Rock, the Eagles of Death Metal and Dethklok Metalocalpyse.

Hull is excited about the venue and its history: "The Shriners used the Shrine Auditorium for their own circus, and if you go down into the basement, there?s literally 90 years of their party stuff down there ? big giant elephants, little clown cars."

"It?s really fun and satisfying to throw a festival ? it?s like throwing a party, times a thousand," Black says.