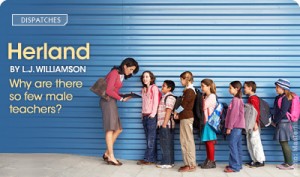 At a party I attended a few years ago, I was enchanted by a guy who gravitated towards me and my son and spontaneously began singing songs to us ? preschool classics like ?Head, Shoulders, Knees and Toes? and ?Three Little Fishes.? When I asked him how he knew all that material ? he looked too young to be a father ? he told me that he used to work at a day care center. Just as I was scanning my memory banks and trying to recall ever having seen a male employee at our preschool, he elaborated ? ?but I quit, because I got tired of everyone assuming I was a child molester.?

My seven-year-old son has yet to be in a class led by a male teacher, and as my two-and-a-half-year-old daughter is preparing to enter preschool, she?ll also be entering a world populated exclusively by women. The only male role models she?ll have at preschool will be her peers, and I?m not sure they will be able to give her the same kind of learning experience a caring adult could. A caring adult would certainly be less likely to knock down her tower of blocks or roll over her sandcastle with a Tonka truck.

The National Education Association recently released figures that the number of male teachers just hit a forty-year low nationally. Teaching has long been a female-dominated field, but recently, men seem to be leaving in droves, despite the so called ?teacher shortage.? Couple this trend with the ?Fatherless Brooklyn? single moms, and you may have significant numbers of small children coming to the conclusion that the world must be run by women. Are they in for a surprise.

Of course, it won?t be long before these kids get old enough to start noticing things like the fact that our country has never had a female president, or that male teachers typically don?t come into their schooling until the academics get more serious. By that point, many will come away with the impression that caring for small children is women?s work, and for the most part, they?ll be right.

There are a number of reasons why men don?t find teaching, especially in the early childhood years, an attractive option. One of these is the pay. We all know that teachers at the elementary school level hardly bring home a king?s ? or even a queen?s ? ransom, but a teacher in early childhood education makes even less.

?There?s loads of research that says that early childhood is a critical time in development, yet we don?t value the people that work with that age group,? says Kristi Bowin, Professor of Child Development at Moorpark College in Moorpark, California. ?But I think having males enter the field would help that. As things are now, men don?t want to be teachers because they don?t want to be poor.?

?We pay our mechanics more to work on our cars than we pay people to watch our kids, which tells you something about our values,? observes William Marsiglio, Professor of Sociology at the University of Florida and author of Men On A Mission: Valuing Youth Work In Our Communities. ?As long as we as society continue to perpetuate the narrative that being nurturing to children is inherently a gendered process, we?ll never have gender equity. It will continue to be a society in which women are disadvantaged, and males are given an excuse not to be involved. ?

?Males bring something different to the table than females do,? Bowin says, and there is plenty of research to back her up. While female caregivers tend to be the ones who excel at tasks such as soothing children who are upset, males? strong suit tends to be what researchers call ?play willingness,? being ready and available to engage in more physical, Those men who might be willing to put up with the low pay might find themselves also having to put up with fierce and blatant gender discrimination.rough-and-tumble play, as well as encouraging more risk-taking behaviors in children. ?Female preschool teachers tend to value calm play and emphasize the importance of social development, while male preschool teachers accentuate the significance of physical development,? summarizes one study. During those occasions in which Bowin has had male students enter her child development program, the children?s response has been striking. ?It?s amazing to me; when there?s a male, the children fall all over him. When you have a young man, they?re drawn to him. They?re starving for it!?

Despite the evidence that a mixed-gender care environment has distinct benefits for children, those men who might be willing to put up with the low pay might find themselves also having to put up with fierce and blatant gender discrimination. Many parents simply aren?t willing to allow their children into a situation where a man might be the one changing diapers.

?In general, we have a family policy against leaving our children alone with men,? wrote one ?mom blogger? to a chorus of agreement from commenters. ?Background checks give me very little reassurance . . . there?s always a first offense and small children are easy prey:. the stigma about male childcare workers . . . is not just a stigma. It?s a statistic. A child is nearly nineteen times more likely to be molested by a male than by a female. We find it easier to make a blanket policy and weed out 95% of our chances for problems.?

Of course, there are statistics to support virtually any position, including those that show that in a majority of sexual abuse cases, the offender is a family member, or that the overwhelming majority of the world?s population has never molested a child. But reading this blog and its enthusiastic responses made me wonder why the concern over sexual abuse, which is correctly described as a primarily male domain, in some circles seems to trump concerns about any other form of child abuse, which could be committed by either gender. The recent case of ?extreme ritualistic torture? involving a Los Angeles boy at the hands of three women who cared for him comes to mind. Of course, no parent wants their child to experience any kind of abuse, sexual or otherwise, but it seems that abuse of the sexual kind remains disproportionately at the forefront of many parents? concerns.

?If parents want to avoid male caregivers, that?s their right, but collectively, it creates an enormous stigma and stereotype that is unwarranted and has significant ramifications for our larger cultural narrative,? says Marsiglio. It?s telling that the need for protection from false accusers is every bit as pressing as the need for protection from child molesters.?I can appreciate the strong sentiment of being protective of one?s child, but to some extent, our perceptions of the risk have been distorted by the media. Yes, there are pedophiles, and one needs to be attentive, but the risk of one?s child being abused is distorted by the media?s repetitive presentation of these kinds of cases, running them over and over again, until males are tainted with this blanket brush as being very dangerous.?

The practice of discouraging males from undertaking child care duties often starts at a very young age. Also echoed by many was the mom blogger?s sentiment that babysitting, that mainstay of teenage female employment, was too risky an undertaking for teenage males. ?When my sweet boy is a teenager, I will not let him baby-sit for other people?s children, for his own protection. An accusation, even one that is later proven false could be life-destroying.?

It?s telling that the need for protection from false accusers is every bit as pressing as the need for protection from child molesters. ?When we have men in our program, I?m more protective of them, because, you know, McMartin,? says Bowin, alluding to the infamous child molestation case that?s been described as ?a modern witch hunt.? Says Bowin: ?There?s a real bias that it couldn?t be natural for a man to be interested in young children, or that any man interested in children is a pervert. We need to change that stereotype ? just like if a little girl might want to be a firefighter, and that?s not typical, but we have to encourage her.?

Marsiglio?s opinion is that teenage boys should be encouraged to babysit just as teenage girls are. Teenagers, who developmentally at a very egocentric stage, says Marsiglio, need opportunities to develop an appreciation for caring for others. In his work with male youth group volunteers, Marsiglio found that the skills they acquired by working with children ? patience, sensitivity, appreciation for the diverse personality types of different kids ? would not only help them to become better fathers, but also make them better able to contribute to society as a whole. ?Developing those skills is something that transcends the family. It extends to the public domain.?

So how does Bowin respond to parents who insist that male employees not change their children?s diapers? ?I tell them that they need to find another place to put their children,? she says. ?We believe that all of our teachers are respectful to children, and we do not discriminate on the basis of gender, just as we don?t discriminate against someone who black, or someone in a wheelchair.?

Yet eliminating gender bias isn?t a top priority for everyone. ?If I?m accused of being sexist, I don?t particularly care, if it means that the odds are higher that my kids are safe,? said one blog poster. ?I don?t care being accused of sexism or paranoia. Better safe than sorry,? echoed another. ?I will not sacrifice my children on the altar of political correctness,? said a third.

But Marsiglio sees the issue as a larger one. For him, having more men taking care of children isn?t just about curbing sexism, but about improving the welfare of all children. ?When you have gender equity in the larger society, with both men and women invested in children?s lives, children will benefit more than they would if only half the population has a strong commitment to them.? How will my son ever learn that fathers aren?t the only men in the world who are supposed to care about children?Of course, children may have committed fathers at home, but that?s not a holistic picture. ?It?s important for children to see men nurturing children in public settings; those lessons in the context of a public setting can be very powerful,? Marsiglio says. Children will grow up more confident and supported, he adds, ?if they feel that a wider diversity of people are looking out for their best interests. But if you only have half the population focused on kids, kids have fewer opportunities. If males who want to become involved with children are looked at askance, then males will be less likely to want to spend time with kids, then society overall will suffer from that.?

I?m grateful that my children have a caring, committed father in their lives. But he?s just one man. Without role models, I wonder, how will my son ever learn that fathers aren?t the only men in the world who are supposed to care about children? Worse yet, will he internalize the message that because he is male, he is not capable of being entrusted with the care of children? I want my son to know that there are real options for men between the simplified extremes of good father and evil predator.