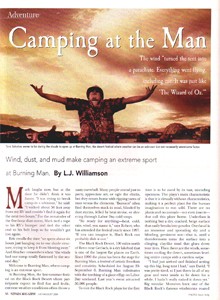 Mark laughs at the memory now, but at the time, he didn't think it was that funny. ?I was trying to break camp in a whiteout, and I walked about 50 feet away from my RV, and couldn't find it again for the next two hours.? For the remainder of the five-hour dust storm, Mark tied a rope to his RV?s bumper and tied the other end to his belt loop so that he wouldn't get lost again.

Eric recalls an occasion when he and his campmates ?Spent about six hours just hanging on to our shade structure, trying to keep it from blowing away.? And Heather remembers a journey in which ?the winds had our camp totally flattened by the second day.?

Welcome to Burning Man, where camping becomes an extreme sport.

At a festival where many participants come expecting to find fun and frolic, extreme weather conditions often throw a nasty curveball. Many go just to party, appreciate art or maybe ogle the chicks, but come home with ripping yarns of man versus the elements. ?Burners? have found themselves stuck in mud, trapped by sudden rainstorms, blinded by dust storms, felled by heat stroke, or shivering the night away through unexpected Labor Day cold snaps.

?Be ready for anything ? heat, cold, rain, wind, you name it,? says Robert, who?s been attending the festival yearly since 1997. ?If you can imagine it, Black Rock can probably dish it out.?

Northwestern Nevada?s Black Rock Desert, home to the annual event, is a dry lakebed or ?playa? that?s one of the largest flat places on Earth. To visit it for the first time is to be awed by its vast, unending openness. The playa?s main characteristic is that it is virtually without characteristics, making it a perfect place for the human imagination to run wild. There are no plants and no animals — not even insects ? that call this place home; underfoot is nothing but a dry, cracked, beige surface that easily breaks into powder, and overhead is an immense and spreading sky and a blinding, persistent sun. That is, until the clouds move in and open up, turning the surface into a clinging, clay-like mud that glues down your tires. And then there are the winds, invisible but omnipresent, sometimes cooling the desert like zephyrs, sometimes swiping down entire camps with the carelessness of a toddler shooing a gnat.

?I had just arrived and finished setting up this big, long tent I had,? says David, ?and I was pretty tired so I just threw in all of my gear and went inside to lie down for a while. I hadn?t really staked it down yet.? Big mistake. Moments later, one of Black Rock?s famous windstorms roared through and ?turned the tent into a parachute. One end of the tent was open, and it created a windsock. Everything went flying, including me. It was just like The Wizard of Oz.?

High winds can catch even the most experienced campers unprepared. ?I was in Xara (a theme camp) when it collapsed a few years back,? explains Fred. ?It was a big rectangular shade structure that had a rainforest inside of it, and it was made out of conduit pipes about 12 feet tall. We thought we had it was anchored really well, but the storm came through and the thing just blew to bits. It had taken about 150 people three or four days to set it all up, and then it was gone. There was rebar and big poles flying everywhere — fortunately no one was injured — but it was really a scary event.?

Though much of the festival?s preparedness guide is devoted to warnings about dehydration, that wasn?t a concern for clean-up crews who remained at Black Rock after the end 1998?s event. Recalls Karie, ?I saw the clouds threatening, and some people were packing as quickly as they could and fleeing, but I thought they were overreacting.? They weren?t. Once the rains came, ?Only people with high clearance, four-wheel drive and the right tires made it out,? she says. David, who narrowly avoided being trapped himself, remembers that ?People were trying to drive out, but so much mud would build up on their tires that they couldn?t rotate anymore, and when you?re spinning the tires it turns into clay, and you?re basically baking the clay inside your wheel wells.? Karie and her companions ended up spending seven days waiting for the thick, impassable mud to dry again and release their trapped vehicles.

Although the rainstorms of ?98 weren?t typical, dust storms are a compulsory part of the Black Rock City experience. ?The playa is not designed to accommodate 30,000 people, so Burning Man winds up creating its own weather,? explains Jeff, a volunteer for the organization. The normally hard-packed surface of the playa is loosened considerably by the thousands of cars, bicycles and feet of its late-summer visitors, and the wide-open terrain?s strong winds create dust storms so severe they obscure nearly everything from view.

In addition to the fierce dust storms, each year at the week-long festival, scores succumb to heat stroke; still more experience moderate to severe dehydration. The alkali dust of the playa dust cracks feet and makes nasal hygiene a substantial task; nosebleeds are common. At night, temperatures have been known to plummet by more than 40 degrees, sending those who?d been wearing little more than sunscreen during the day scrambling for parkas at night. So why do people keep coming back?

?My favorite part of Burning Man is when you have a full whiteout,? says Heather. It?s the best time to find a drum circle and just put on a good mask and good goggles — you can?t even see where you?re going, but you can hear the drums and you find them and you dance, and you can?t see the people next to you. In that moment, there?s chaos, everything?s breaking loose, and you?re celebrating. It?s amazing.? Adds Jenny, ?I like the unpredictable element because it?s taught me how to appreciate things as they are now. When Xara blew down, everyone said it was horrible, but it made me realize that when you see something, you?ve got to do it now, because tomorrow it might be gone. Just like in life, somebody you love might be alive today and then they?re not tomorrow, and it really makes you realize why every day is important.?

In addition to the larger lessons the extreme weather imparts to desert visitors, a week in Black Rock can also instill an appreciation of life?s smaller pleasures. Says Liz, ?After so many days of dust, there?s nothing better than that first shower you take when you get back home.?