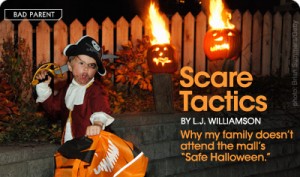 At Halloween, there are few words that frighten me more than ?Bring your kids to the mall for our annual ?Safe Trick-or-Treat!'?

It?s not that I?m afraid that Halloween is a thinly disguised occasion for devil worship. Some fret over Halloween?s alleged satanic origins, but even if it were conclusively proven that the first jack o? lantern were carved by virgin-sacrificing, blood-drinking pagans, I would hardly be concerned. I?m not that worried about five-hundred-year-old kooks.

I?m not particularly concerned about modern-day kooks either. The myth of the creepy old sadist who gets his kicks by slipping razor blades into apples or crack into Fun Size Snickers bars for random dispersion to legions of tiny, unsuspecting Cinderellas and Anakin Skywalkers has been conclusively debunked as urban legend.

So what is it that I find so eerie about the ?Safe Halloween? celebration at the local mall? It?s the word ?safe.?

Having the word ?safe? in the name not only drains all of the spookiness right out of the party, but it also puts forth a much more problematic insinuation. When one thing is described as ?safe,? the implication is that its alternative is unsafe; that the Halloween you celebrate in your own home, on your own street, with your own neighbors, is inferior to one spent with Orange Julius, Victoria?s Secret and Footlocker. When Halloween moves to the mall, corporate America commandeers what once was a community event and turns it into a commercial one, whispering into our children?s ears, ?You can trust us; you can?t trust them? ? ?them? being the people who live in your neighborhood and in your town.

To take Halloween off of the moonlit sidewalks or corridors of a child?s own street or apartment building and relocate it under the bright fluorescent lights of a shopping center is to confiscate its magic, and put the holiday?s crucial fear factor in entirely the wrong place. I?d much prefer my small children spend their Halloween night cowering in fear of werewolves and mummies than of car crashes and child molesters, because having the time to dwell in the realm of imagination is what childhood is supposed to be about. Of course, children need to know about real-life dangers, but they deserve a holiday too. What better opportunity than Halloween for children to give shape to their imaginative fantasies, whether heroic, malevolent or sparkly?

When selling the idea that Halloween in your own neighborhood just isn?t safe, retailers stoke our fears of imaginary boogeymen and our worst insecurities about our abilities as parents. I?m not falling for it. I have a real problem with being told that I?m better off spending Halloween going not from house to house, but from retailer to retailer. I?m competent enough to see my children safely across a street, even at night. I?m observant enough to tell if a candy package has been tampered with. And I?m brave enough to go up to each door with my children and say, ?Hi, I?m your neighbor, I live down the street, it?s nice to meet you.?

As a child, my parents did their best to teach me the difference between fiction and reality, but that still didn?t prevent me from harboring doubts that a monster might be crouching under my bed or that a ghost might be lurking in the attic. I was free to mull over these unsettling ideas, because my parents kept me so thoroughly safe from harm that I didn?t have any reality-based anxieties to deal with. On Halloween we were always escorted by flashlight-toting, candy-inspecting parents, and it was the one night I was allowed to roam the streets after dark, to see my neighborhood in, quite literally, a whole different light. A walk through a well-lighted mall can?t compare to the magic of being allowed out after dark. We only traversed the calmest streets, so the absence of worries about traffic freed our minds to wonder about more pressing matters, like whether witches might be swooping through the skies or skeletons dancing in the graveyards.

Kids enjoy feeling safe as much as or maybe even more than adults do, but I can?t imagine that a walk through an enclosed, well-lighted mall can compare to the magic of being allowed out after dark, under the stars, glowstick in hand; of straining to hear the impossible hoot of an owl or moan of a ghost; of decoding what each house?s pumpkin-carving style reveals about its occupants; of getting that once-yearly glimpse through your neighbors? doorways hoping for a peek at what lies beyond. I?m not going to make my child trade that in for another trip to the same place where we go to buy socks and underwear. Safe Halloween? Sorry, shopping center. I?ll take my chances on our own street.