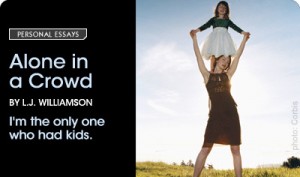 In certain circles, having children is not the most fashionable thing to do. It?s often regarded as a curious, amusing, but why would anyone want to do that to their life? sort of thing. Strangely enough, I happen to be part of one of these circles, and I?ve got two kids.

What was I supposed to do ? tell my friends that they?d better get on the procreation ball pronto, because I needed some company? Believe me, I tried. No one listened. They all just sat around making flimsy excuses like, ?I enjoy my freedom too much,? or ?I don?t have a partner,? or ?The world is overpopulated enough as it is,? or ?I?m too broke,? or ?I?m gay.? So they left us to be the sole childbearing trailblazers of our friend-family.

To be fair, a few friends did manage to work up the nerve to have children, but they responded to the blessed event by immediately packing up and leaving L.A., muttering something as they left about no longer wanting to spend 95% of their income on housing or 95% of their time on freeways or some such nonsense.

So I was left to try to connect with other parents through various places like Gymboree or HipMama.com, but I just couldn?t make it work. Gymboree was a consumerist nightmare, and it turns out every mama believes she?s a hip mama ? even the ones who think they?re edgy because they tried sushi once and get all of Cathy Guisewite?s jokes. Sure, there must be parents out there who share my sensibilities, but I just wasn?t finding them, and screening a potential friend through a parenthood filter seemed kind of ass-backwards to me anyway. My friendships had always come about more organically, and seeking out potential friend candidates in such an organized way often left me feeling as if I?d just been through a bad internet date. Worse, actually, because on a date there?s at least the potential that you might get laid. On a toddler playdate, not so much.

I learned that parenthood alone isn?t enough commonality to base a friendship on, and afterwards many of these meetings, I?d run screaming back to my friends, who, though childless, know how to crack wise and smart off in a way I?ve never heard anyone do at Mommy & Me.

I envied those people whom I overheard saying, ?It seems like everyone we know is having kids these days!? and faux-complaining about all of the baby shower invitations they were getting. Most of the invitations I get are to parties I can?t attend because (a) they start too late at night, (b) I don?t have babysitting, or (c) the presence of children might inhibit the planned degree of drunken debauchery. Hey, I don?t want be the one whose crying baby is the buzzkill at your pirates vs. ninjas vs. klowns-on-stripper-poles bacchanal, so I guess I?ll stay home. Yeah, my friends still do that kind of stuff for entertainment. They have to, because they don?t have kids.

Not only was I turning down more party invitations now that I was a parent, but I also began keeping radically different hours from most of my friends. I?d call a confidante during the afternoon, but they?d usually have trouble squeezing time for my hour-long sob story about my son?s incurable diaper rash into their work day. By 5:00 p.m., when friends were finally ready to unwind and socialize, the busiest part of my day would be beginning, with dinner, homework, baths, toy put-aways, and story time. Right around the time my friends were meeting for drinks, I?d be collapsing into bed. I crammed what socializing I could into the weekends, but it didn?t keep me from feeling extremely isolated much of the time, especially in the early days of my struggle to make the adjustment to the stay-at-home lifestyle.

The transition was a rough one. I often felt lonely, angry, and jealous of my untethered friends who had jobs to go to and really compelling reasons to wear things that weren?t sweatpants. I remember feeling as if the world had left me behind, like I was stuck in a 1950s housewife time warp. One day, at my nadir of self-pity, as I wondered what women in the ?50s did to cope with the crushing sense of isolation that staying at home full-time can provoke, I realized that they probably didn?t have a crushing sense of isolation, because damn near everyone they knew was doing the same thing they were. Society wasn?t as fragmented by the pesky freedom of choice we have so much more of today. If a ?50s housewife phoned a friend, that friend would probably answer, because she didn?t have the Pill and didn?t have her calls rolled over to voice mail because she had a huge deadline to meet. How great those women had it, I thought. Sure, they were shackled to their stoves, married to men who?d never dream of changing a diaper, they had no real career options and no reliable birth control, but at least they had friends who were home in the afternoon!

Okay, get a grip on yourself, I finally told myself. Feeling jealous of your friends is unhealthy, and feeling jealous of women in the ?50s is ridiculous. Besides, I love my friends and I hate poodle skirts.

Slowly, I began to accept my fate as my group?s designated breeder, and began to more fully appreciate what a blessing it was to have the privilege of staying home with my children. Besides, my friends were who they were, and they weren?t going to change, and I wouldn?t want them to anyway. And I realized that even if I did have a bunch of parent friends, you can only have the same conversations about fevers, potty training and playdate traumas so many times. And I really love the fact that, because they?re usually the only children around, my kids get showered with attention and gifts from their numerous aunts and unkies. Who else would my friends give all of those unwanted Drinky Crow comics, Episode I action figures, Invader Zim lunchboxes and videos of The Brak Show to?

I?m also very grateful for those occasions when I can accept an invitation to an all-adults party, because those outings do me a world of good. I like still feeling connected to the world I inhabited B.C. (before children). Usually, it?ll be somewhere around 2:30 or 3:00 a.m., when I?m fighting to keep my eyes open, that one or more of my friends is drunk enough to have reached the I-love-you-man stage, they?re also kind enough to add, ?and I love your kids!? Then they slur adorable things like, ?Too damn many hardcore neo-con fundamentalist types are having babies all of the time, so I?m glad people like you guys who aren?t total idiots are doing it too.? Aww shucks, that?s sweet.

That?s what I get for signing on with an alliance of carousing, freedom-loving, commitment-ambivalent friends. Parents or not, I wouldn?t trade them for the world.