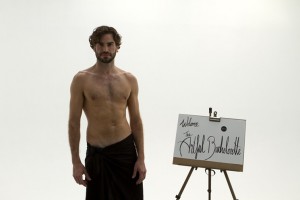 And it's why I'm not anticipating any pant-inducing thrills, certainly, from seeing a naked stranger in the middle of a photography studio in West Hollywood. Yet here I am, feeling a bit silly as men wearing nothing but black slacks and bow ties circulate plates of fruit and glasses of champagne.

But when class begins and Kaolin, that evening's model, drops the black cloth from his waist, revealing a flawless nude form and an endearing smirk, I'm riveted, just wanting to stare and stare and stare. Every muscle, every shadow and contour highlighted in this brightly lit studio seems a work of art. The giggles and hoots of approval are no distraction, but the task of committing this perfect specimen to pencil and paper seems a hopeless task. Luckily, I won't be graded in this art class ? because it's really just a party.

Already old hat in Sydney and New York, The Artful Bachelorette has finally made its way to Los Angeles, and if these naked-guy art class parties enjoy the success here that they have on the East Coast, soon the standard Chippendales-style girls night out bachelorette party, loaded with loud music and gyrating junk, will be replaced with this comparatively classy ? yet still cheeky ? affair.

Company co-owner Fleur Childs, who has already hosted more than 300 of these art-class-style celebrations over the last two years in New York, exhorts us to have fun. "The more you drink, the better you draw, so if your glass is empty, just raise your hand and they'll take care of you!" she says, laughing, indicating the two shirtless men on either side of the room who stand, bottles at the ready.

Ironically, it's often the drawing that makes guests more uneasy than the nudity, Childs says in an interview. "Everyone's a little nervous at first when they're told that they're going to draw, because some people haven't drawn since high school or elementary school. So we pour them a glass of champagne. And when there's a piece of paper between you and the naked man, it feels more comfortable ? it doesn't feel weird."

Childs describes her company's parties as considerably more tasteful and relaxing than the strip club experience where beefy males wiggle their crotches at the bride, urged on to humiliate her by cheering bridesmaids. "It's something you could bring your mom to, or your grandma."

Estelle's "American Boy" plays from the sound system, part of a playlist of female-oriented pop that fills out the girly party atmosphere, as we pick up our smudgy art pencils. Childs, who has a fine arts degree and has taught university life drawing classes countless times, is especially adept at making the experience pleasurable for non-artists with a series of exercises designed to hush our inner critics. We draw with our non-dominant hand for one pose, then draw without looking at our paper, then draw using only straight lines, no curves.

Drawing is something I seldom undertake for pleasure, but I find myself delighting in the feeling that my soft pencil is grazing the contours of the model's body as I trace the outlines of the his shoulders, his waist, his spine, realizing that art demands a higher level of seeing than ordinary life typically asks of us. Every detail needs to be noticed ? a rippling muscle here, a scrotum there. Yep, still naked. The shock value of the nudity wore off after about three seconds, however, and just gave way to wonder at the human form. Especially this human's form. In academic art classes, Childs explains, students see a variety of models ? male, female, young, old, thin, voluptuous. But here, it's all about the hotties. Pass the champagne!

At the end of each exercise, we all hold up our clipboards for the model to judge. This, in addition to the inversion of gender norms (in this room, the males are the objects of the female gaze), smooths out any sense of exploitation or objectification. Sure, we're judging his naked body, but in turn, he's judging our drawing skills. Seems a fair trade. He gets to decide whose drawing is the best, and he bestows the winner with a wreath of fresh flowers to wear on her head for the duration of the party.

Adam, one of the company's models, says he used to be overweight as a teen, so posing nude, with his trim, healthy body, he says, is a liberating and empowering experience. He's learned not to worry about his physicality so much as his energy, and approaching the job with the appropriate celebratory spirit of the partygoers rather than thinking of how he might be judged.

Adam has also worked as a model for more academic art classes, but this is an entirely different experience. "In the art classes, you wonder what people are thinking. Here, you know what they're thinking, because they say it," he says. He also laughs about how modest people tend to be at the events. "In the first round of drawings, typically, no one will have a penis."

Being a model at these parties has given Adam one life lesson he's taken outside of class with him, one that carries him through the job with a lighthearted spirit. Over time, the thing he's come to realize is, "People aren't paying as much attention to you as you think they are."

Got a special occasion coming up that calls for a naked man? Book your own Artful Bachelorette party by visiting TheArtfulBachelorette.com.